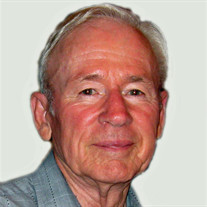 Dr. Royal F. Jester, Jr., 95, died Thursday, October 4, 2018 at his home in Kearney. Private Family Services will be held. Memorials are suggested to Kearney Public Schools Foundation or to the University of Nebraska Foundation for scholarships established at the University of Nebraska at Kearney. Online condolences may be submitted at www.hlmkfuneral.com. Horner Lieske McBride & Kuhl Funeral and Cremation Services in Kearney are in charge of arrangements. He was born September 10, 1923 in Grand Island, NE to Dr. Royal F. and Amelia (Loewenstein) Jester, Sr. He grew up in Kearney and graduated from Kearney High School in 1941. He was veteran of WWII, serving in the United States Army for 3 years, including one year of school at North Carolina State and then was stationed in Germany before being discharged in 1946. He then continued his education at Kearney State College. On September 14, 1947 he married Betty Jo Sprout in Franklin, NE. He then attended the University of Colorado where he graduated in 1949. He received his Doctor of Medicine degree from the University of Nebraska College of Medicine in 1953. He served an internship at the University of Kansas Medical Center in Kansas City and then returned to Kearney in general practice for two years before returning to the University of Nebraska College of Medicine for an Ophthalmology residency for three years. He then returned to Kearney where he practiced Ophthalmology until retiring in July of 2002. He was a member of the Kearney Public Schools Board of Education for 17 ½ years; served as Scoutmaster of Troop 139; and District Chairman of the Boy Scouts of America and was also an Eagle Scout. He was a member of the First Presbyterian Church; Buffalo County Medical Society; Nebraska Medical Association; Nebraska Academy of Ophthalmology; American Academy of Ophthalmology, American College of Surgeons; American Medical Association; Kearney Area Chamber of Commerce/ Kearney Elk’s Lodged #984; V.F.W. Post #759 and served on the staff of Good Samaritan Hospital. Surviving relatives include sons, J. Randal Jester and his wife Mickey of Downers Grove, IL and Ronald Jester and his wife Beverly of Lincoln; daughter, Dr. Beth A. Jester of Santa Fe, NM; grandchildren, Brent Jester, Ryan Jester and his wife Laura, Cameron Jester, Nicholas Jester, Ben Bashline and Anna Bashline Spurway and her husband, Jonathan; great –grandchildren, Harrison Spurway, Beauden Spurway and Georgia Spurway. He was preceded in death by his parents; his wife in 2013 and two brothers.

Dr. Royal F. Jester, Jr., 95, died Thursday, October 4, 2018 at his home in Kearney. Private Family Services will be held. Memorials are suggested to Kearney Public Schools Foundation or to the University of Nebraska Foundation for scholarships... View Obituary & Service Information

The family of Dr. Royal F. Jester Jr. created this Life Tributes page to make it easy to share your memories.

Send flowers to the Jester family.