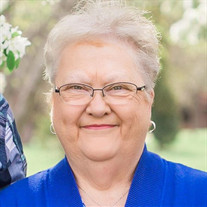 Ruth A. Kreutzer, age 70, of Kearney, died on Saturday, August 17, 2019 at the Kearney Regional Medical Center in Kearney. Mass of Christian Burial will be on Thursday, August 22, 2019 at 10:30 a.m. at St. James Catholic Church in Kearney. Father Joe Hannappel will officiate and burial will be at Kearney Cemetery. Visitation will be on Wednesday, August 21, 2019 from 5:00 p.m. – 6:00 p.m. followed by a Christian wake service at 6:00 p.m. all at St. James Catholic Church. Memorials are suggested to the family, for designation later. Please visit www.hlmkfuneral.com to leave a tribute or message of condolence. Horner Lieske McBride & Kuhl Funeral and Cremation Services in Kearney is in charge of arrangements. Ruth was born on April 4, 1949 in Kearney, NE to Raymond H. and Marie E.M. (Vest) Loeffelholz. She attended Kearney High School and graduated in 1967. She married Roland “Sonny” E. Kreutzer on December 10, 1971 in Kearney. Ruth and Sonny were foster parents to 30 children throughout their lives and adopted 3 children of their own. A child in need was never turned away from her home. In additional to her roles as a devoted wife and mother, Ruth worked for a variety of companies around the area including Center for Psych., B & B Answering Service, Fidelke Heating and Air, as well as Horner Lieske McBride & Kuhl. She was a member of St. James Catholic Church in Kearney. Ruth loved spending time with her family and always ensured that they were well fed. Ruth, a renowned cook, never entered an event without an offering. Her greatest joys included attending events for her grandkids, nieces and nephews. She was always sure to let others know that she was cheering them on. Ruth excelled at sewing, quilting and knitting. Many family members and friends can attest to this with their collection of quilts, knitted hats and scarves. She was a protector and nurturer by nature, and her intent behind every craft, skill, or art was to help and bring joy to others. Surviving relatives include her children, Brent and Amber Kreutzer of Kearney, Betty and Phillip Smith of Minden, NE and John Kreutzer of Kansas; sisters, Viola Hibberd of Kearney and Marilyn and Roger Danielson of Holdrege, NE; brother, Albert and Janice Loeffelholz of Riverdale, NE; grandchildren, Anais, Sonny, Kalista, Chase, Joplin, Haven, Arik, Jasper, Eleanor and Amelia; brothers and sisters in law, Twila and Loren Bosshamer of Amherst, NE, Marilyn Bailey of Lexington, NE, Lois Lee of Riverdale, NE and Alan Kreutzer of Kearney; numerous foster children, nieces, nephews, cousins, other extended family and friends. Ruth was preceded in death by her parents; husband, Sonny, grandson, Billy, brothers and sisters in law, Darrell Hibberd, Bill Bailey, Roger Lee, Melvin and Luella Wuehler, Larry Kreutzer, Bobby Kreutzer, and Charlene Kreutzer.

Ruth A. Kreutzer, age 70, of Kearney, died on Saturday, August 17, 2019 at the Kearney Regional Medical Center in Kearney. Mass of Christian Burial will be on Thursday, August 22, 2019 at 10:30 a.m. at St. James Catholic Church in Kearney.... View Obituary & Service Information

The family of Ruth A. Kreutzer created this Life Tributes page to make it easy to share your memories.