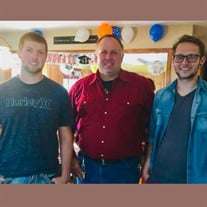 Ryan J. Jacobs, 53, of St. Paul, NE, passed away Monday, December 7, 2020 at CHI Health – Good Samaritan Hospital in Kearney. Ryan’s wishes were to be cremated. Private family services will be held at a later date. Memorials are suggested to the family to be designated later. Please visit www.hlmkfuneral.com to leave a tribute or message of condolence. Horner Lieske McBride & Kuhl Funeral and Cremation Services in Kearney is assisting the family with arrangements. Ryan was born on April 3, 1967 in Grand Island, NE to Sammy and Arvilla (Zmek) Jacobs. He attended St. Paul High School and graduated in 1986. After high school he attended Hastings College. Ryan farmed the majority of his life. As a young man, Ryan’s accomplishments were many. His participation in cross country, track, wrestling, and football resulted in many awards. A partial list: He represented his school at state wrestling tournaments yearly, as part of the Loup Platte All Conference Teams in 1982-1983 and 1984-1985, and won many medals. He loved training for and playing football. He was named Class B State Honorable Mention in 1984-1985 and ended his football career as a Bronco for Hastings College. In 1980, Ryan was a member of the Nebraska AQHA National Horse judging team at Tulsa, OK and served as St. Paul’s representative to the Nebraska Agricultural Youth Institute (NAYI). Ryan was also very active in 4-H winning Boys Showmanship at the State Horse Show and in 1981 Champion English Equitation at Ak-Sar-Ben. He was also a member of the 4-H group that traveled to Chicago, New York and Washington D.C., as well as, a 4-H delegation that traveled to Trinidad and Tobago. Along with a good action movie, Ryan loved a mechanical puzzle. He could take anything apart and put it back together. This served him well as he worked on the development and operation of the family farm. In his adult life, Ryan could be found in his shop tinkering on an engine, or off on some distant hill on his motorcycle feeling the freedom of the highway. He loved his Blue Heeler, Sara, whom he was never seen without. Those who knew Ryan best, knew he would drop anything he was doing to be there for them if asked. His compassion, and the love that he had for his loved ones, was never asked in return. Ryan was beloved by his two children who often experienced the childlike grin that could beam from their father’s face. His loved ones knew him as someone who loved to laugh and to make others laugh. However unique his sense of humor, Ryan had a good heart. His sons, Tyler and Austin, were his life. Ryan will be missed by those he leaves behind but remains in the memory of those who listened to his stories or even a passing joke. Surviving relatives include his sons, Tyler Jacobs and Austin Jacobs, both of Kearney; parents, Sam and Arvilla Jacobs of St. Paul; sister, Lynnette Schneekloth and husband Greg; nieces, Bridgette (Schneekloth) James and husband Matt, Mackenzie (Schneekloth) Walkenhorst and husband Josh; and special friend Cindy Burkhart of Central City. Ryan was preceded in death by grandparents, Clayton and Helen Jacobs, and Matt and Caroline Zmek.

The family of Ryan J. Jacobs created this Life Tributes page to make it easy to share your memories.

Send flowers to the Jacobs family.