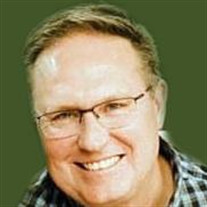 Scott A. Bennett, 57, of Kearney, passed away, October 31, 2019 at C.H.I. Health Good Samaritan Hospital in Kearney. Funeral services will be 10:30 am, November 5, 2019 at First United Methodist Church with Rev. Alan Davis officiating. Burial will follow at the Kearney Cemetery. Visitation will be from 5:30 to 7:30 pm, November 4, 2019 at Horner Lieske McBride & Kuhl Funeral Home and one hour prior to the service at the church. Memorials are suggested to the family to be designated later. Scott was born July 25, 1962 in Kearney to Walter and Marla (Bailey) Bennett. He graduated from Gibbon High School in 1980. He attended Kearney State College, and then became certified as a dental technician. Scott married Robin Beavers June 23, 1984 in Gibbon. They lived in Kearney. Scott was an owner of Sickler Dental Studio in Kearney. Scott was a wonderful man - a devoted husband, a loving father of his two daughters and his son-in-law, and a fun poppy who adored his granddaughter. From coaching his daughters’ teams to playing in the pit band for their musicals, he was always their rock. He was love all the time. His selfless, gentle spirit looked for the good in everyone and he would spread his love everywhere he went. To know him was to love him. He had a fun sense of humor and was a genuine, loyal friend. Scott was a gifted musician with a passion for drumming, a past Gibbon volunteer firefighter and EMT, a DJ, a handyman, and even Santa Claus. He was artistic, meticulous and a perfectionist. As a certified dental technician, not only did he make smiles and teeth for others, but his smile lit up a room. He was an avid Husker and New England Patriots fan. He was a godly man who loved the Lord and shared that love with his family. In honor of Scott’s life, it is our hope that we all love one another, seek our Lord, truly be kind, and take God’s love and light and pass it on. Scott is survived by his wife, Robin Bennett of Kearney; daughters Chantelle Batie and husband Adam of Kearney, Rhiannon Bennett of Kearney; granddaughter, Collyn Elise Batie of Kearney; mother, Marla Dadey of Blounts Creek, NC; brother, Kent Bennett of Lincoln, NE; sisters, Brenda Butcher and husband Marty of Lincoln, NE, Barbra Hernandez and husband Jesse of Blounts Creek, NC; sister-in-law, Tiffani Young and husband Mike of Kearney; nieces, Makayla, Hannah, Bailey, Sydney, Riley, Annie, Jessica, and Jamie; and nephews, Brennan and Brekken. Scott was preceded in death by his father, brother Jimmy Bennett, and mother and father-in-law Betty and Robert Beavers.

The family of Scott A. Bennett created this Life Tributes page to make it easy to share your memories.

Send flowers to the Bennett family.