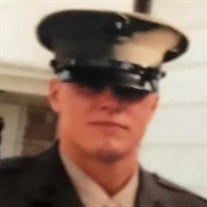 Thomas D. Keyser, Jr., 41, died Monday, June 4, 2018 in Salina, Kansas from complications of an illness. Memorial Service will be held on July 13, 2018, 10:30am, at the First United Methodist Church in Kearney. Rev. Alan Davis will officiate. Burial of ashes will be at Kearney Cemetery. A reception will be held at First United Methodist Church after internment. . Please visit www.hlmkfuneral.com to leave a tribute or message of condolence. Horner Lieske McBride and Kuhl Funeral and Cremation Services of Kearney is in charge of arrangements. Tommy was born in Kearney, Nebraska on June 16, 1976 to Shelley and Thomas Keyser. Though having lived in many places, he primarily resided in and around the Kearney, NE area. Tommy was a fan of college/professional football and basketball, UFC fighting, and his favorite show was “The King of Queens.” He had been watching the NBA championship games before his death; he was hoping the Golden State Warriors would win the championship – and they did! Tommy will be remembered for his love of lifting weights, clever wit, ironclad memory, high intelligence, resilience, and ability to be both vulnerable and strong at the same time. These memories will bring comfort to friends and family in the days ahead. Though Tommy was at times unable to make it to family holidays, we are comforted knowing that he had a wonderful Christmas and New Year’s celebration in Pleasanton, NE with his mom, her husband, and his little brother. He leaves behind 4 kids; Tristen, Kristian, Ryan, and Siera Keyser; mother, Shelley Lammers and her husband, Mike; father, Thomas D. Keyser Sr. and his wife, Jennifer, and their 3 kids; brother, Marcus Keyser and his wife, Tonya and their 3 kids; brother, Douglas Bliss and his daughter, Genevieve; brother, Loucas Keyser; brother, Travis Keyser and his fiancée, Sam, and their child; brother, Matt Bliss; his companion, Jalyn Todd, and their dog, Smurf; and many aunts, uncles, and friends. He was preceded in death by his brother, Mathes Keyser; maternal grandparents Rodney and Genevieve Bliss; paternal grandparents John and Helen Pinner.

Thomas D. Keyser, Jr., 41, died Monday, June 4, 2018 in Salina, Kansas from complications of an illness. Memorial Service will be held on July 13, 2018, 10:30am, at the First United Methodist Church in Kearney. Rev. Alan Davis will officiate.... View Obituary & Service Information

The family of Thomas D. Keyser created this Life Tributes page to make it easy to share your memories.

Send flowers to the Keyser family.