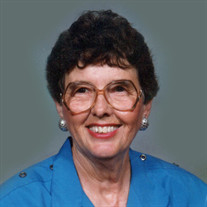 Verna E. Barney, 93, of Kearney died Tuesday, July 23, 2019 at Good Samaritan Society – St. Luke’s in Kearney surrounded by her family. Memorial services will be Friday, July 26, 2019 at 11:00 a.m. at St. Luke’s Episcopal Church in Kearney. Rev. Stephanie Swinnea will officiate. Visitation with the family present will be 1 hour prior to services at Fellowship Hall at the church. Private family graveside services will be at Kearney Cemetery. Memorials are suggested to St. Luke’s Episcopal Church or to the Kearney Jubilee Center. Please visit www.hlmkfuneral.com to leave a tribute or message of condolence. Services are under the direction of Horner Lieske McBride & Kuhl Funeral and Cremation Services of Kearney. Verna Elaine Davis Barney was born on November 16, 1925 to Homer and Frances (Haase) Davis. She grew up in Keystone, NE until the family moved to Reynolds, NE where she graduated from High School. Verna attended Nebraska Wesleyan University in Lincoln and is a graduate of Bryan Memorial Hospital School of Nursing. Verna was united in marriage to William (Bill) Barney on August 24, 1947 in Lincoln, NE, where they first lived. They then moved to Kearney where they made their home. To this union three children were born; Richard, Patty and Kent. Verna briefly worked in the pediatrics and newborn wards at Bryan Memorial Hospital and Bill graduated from the University of Nebraska School of Law. When they moved to Kearney, Bill worked in the family business of W. W. Barney & Son. Verna worked at Student Health at Kearney State College and volunteered at the Red Cross Bloodmobile until 1987. She was primarily a homemaker while she and Bill raised their family. She was an active member of P.E.O Chapter FN and a loyal member of St. Luke’s Episcopal Church. At the church she was a member of the Altar Guild and sang in the choir along with Bill every Sunday. She volunteered at the Nearly New Shop at the church which later became the Jubilee Center. She was also awarded the Kiwanis Citizen of the Year in 1983. Verna loved to play golf, getting a hole-in-one on number 4 (the water hole) at Kearney Country Club in 1965. She will best be remembered as a loving friend to all. She loved to work outdoors in the yard, and in her daily walks would make sure her neighbor’s yards were free of trash and weeds. She took great pride in helping others. Her greatest joy was her family. Surviving relatives include her children, Richard Barney and wife Brenda of Edmonds, Washington, Patty Engdahl and husband Jack of Lincoln, and Kent Barney and wife Cindy of Kearney; grandchildren, Joy Podliska and husband Shane and Jon Engdahl and wife Casey all of Lincoln, Adam Barney and wife Tessa of Omaha, Jason and Travis Barney of Kearney, Olivia Barney of Santa Cruz, CA, Emily Barney of San Francisco, CA and her great grandchildren, Riley, Connor and Grace Podliska of Lincoln, Cora, William and Oliver Barney of Omaha, Maddison Engdahl of Lincoln, and Chloe Engdahl of Gretna, and many nieces, nephews and great nieces and nephews. She was preceded in death by her husband Bill, her parents, Homer and Frances, her sisters Maxine Seay and Mary Jean Andrews and her grandson Jeff Engdahl.

The family of Verna E. Barney created this Life Tributes page to make it easy to share your memories.

Send flowers to the Barney family.