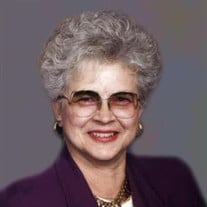 Vianne B. Anderson, age 82, of Kearney, passed away Wednesday, September 9, 2020 at the Country House Residence in Kearney. Due to Covid-19 restrictions a celebration of Vianne’s life will be held at a later date. The family requests that cards and memories can be sent to the funeral home, 2421 Ave. A, Kearney, NE 68847. Memorials are suggested to the church of your choice. Vianne was born October 28, 1937, in Ansley, Nebraska, to Walter and Alberta (Roach) Anderson. She was active in Campfire Girls, Jobs Daughters and she was a cheerleader during her school years. Vianne was confirmed at the age of 12 in the Methodist Church in Ansley. She graduated from Ansley High School with the Class of 1956. She married Melvin Dwayne Anderson on October 15, 1960, in Scottsbluff. The couple lived in Arizona while Dwayne was serving in the military, at Scottsbluff, and most of her life in Kearney. Vianne was a very talented person and made and sold craft items through her home business. She worked at various jobs and for several years in the Kearney Public Schools system. Vianne was a very giving person and cared about others. She visited many people in nursing homes and care facilities and brought a lot of joy with her smile and kind words. She served as Den Mother while her son, Tim, was in Cub Scouts. In later years, she and her husband traveled to flea markets and sold antiques. They made many cherished friends during these travels and they became like family. She attended the Presbyterian Church in Kearney. Survivors include her husband, Dwayne “Andy” Anderson of Kearney; son, Tim Anderson of Kearney; one granddaughter, and several great grandchildren; uncle and wife, Art “Babe” and Julie Roach of Kearney, and their daughters, Kelli Roach and Kathi Paulsen, both of Omaha, and Sheri Wharton of Denver, and their families; nieces-in-law, Marcia and her husband Wayne Hora of Stapleton and Marilyn and her husband Rex Crawford of Lincoln. She was preceded in death by her parents, twin sons, Danny and Donny Anderson; her father and mother-in-law, Harold and Anna (Rosentreader) Anderson, sister-in-law, Dorothy Maxine Montanye; and brother-in-law, Clayton Montanye.

Vianne B. Anderson, age 82, of Kearney, passed away Wednesday, September 9, 2020 at the Country House Residence in Kearney. Due to Covid-19 restrictions a celebration of Vianne&#8217;s life will be held at a later date. The family requests... View Obituary & Service Information

The family of Vianne B. Anderson created this Life Tributes page to make it easy to share your memories.

Vianne B. Anderson, age 82, of Kearney, passed away Wednesday,...