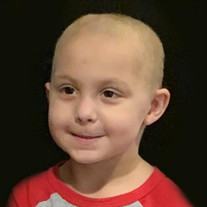 Wyatt J. Smidt, age 5, of Kearney, passed away Monday, March 23, 2020 at his home following a two year battle with pediatric cancer. Private family services will be held 10:30 a.m., March 27, 2020 at Holy Cross Lutheran Church in Kearney with Rev. John Rasmussen officiating. Burial will follow at the Kearney Cemetery. The public may watch the funeral live stream at www.holycrosskearney.org. Follow the directions under the livestream toolbar in the main menu dropbox. Visitation will be March 26 from 3:00 to 7:00 p.m. at Horner Lieske McBride & Kuhl Funeral and Cremation Services. We ask that people comply with the CDC and State of Nebraska’s suggestions of limiting the size of gatherings. In lieu of flowers memorials are suggested to Children’s Hospital and Medical Center in Omaha or it is suggested to bring a children’s toy to be donated in Wyatt’s memory to Children’s Hospital. Wyatt was born July 25, 2014 in Kearney and later adopted by Kyle and Kathy Smidt on January 5, 2018. He attended Pre-K at Zion Lutheran School in Kearney. Wyatt faced pediatric cancer with courage, strength, and with a positive spirit, that inspired all who knew his story. He had something so very special about him. Wyatt was full of life, ambitious, and became friends with anyone he met. Wyatt touched so many lives that crossed his path in five years. He was a true hero and an inspiration to everyone who met him. Wyatt enjoyed superheroes, sports, and playing games. He talked about being a hockey player and a police officer when he grew up. Wyatt is survived by his parents Kyle and Kathy Smidt of Kearney; sister, Ashlyn Smidt of Kearney; grandmothers, DeEtte Smidt of Superior, NE, Patricia Fortkamp of Kearney; grandfather, Duane Fortkamp of McCook, NE; great grandfather, Martin Fortkamp of McCook, NE; aunts and uncles, Gene and Kim Creamer and children Brian, Brad, and Sarah; Kurt and Karen Smidt and son Kristopher; Allen and Kelly Schiermeyer and children Kendra and Eric; Barry and Karla Blackstone and children Madison and Conner; Mike and Jeanette Fortkamp and children Mathew, Morgan, and Marcus. Wyatt was preceded in death by his grandfather Gilbert Smidt, great grandparents, Klaus and Leona Smidt, Everett and Amanda Schlick, Don and Mary Smith, Erma Fortkamp, and cousin Kalen Schiermeyer.

The family of Wyatt J. Smidt created this Life Tributes page to make it easy to share your memories.

Send flowers to the Smidt family.