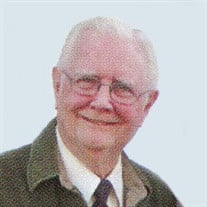 Jack A. Karraker, 84, of Kearney, died Saturday, November 23, 2019 at Brookdale Northridge Assisted Living in Kearney. Celebration of life services will be in the spring of 2020 with graveside services in Abilene, KS. Memorials are suggested to the Museum of Nebraska Art. Please visit www.hlmkfuneral.com to leave a tribute or message of condolence. Arrangements are under the direction of Horner Lieske McBride and Kuhl Funeral and Cremation Services in Kearney. Jack was born on April 3, 1935 to Don and Beulah (Ashford) Karraker in St. Louis, MO. The family moved to Abilene, KS shortly after Jack was born. He grew up in the Abilene area with his older brother Donnie and younger brother Henry. He attended Abilene High School and graduated in 1953. Jack earned a Bachelors Degree from Fort Hays State College and then a Masters Degree from the University of Idaho. He began his teaching career at Great Bend, KS where he taught for 5 years. He then moved to Kearney, NE where at the age of 26 he became the head of the Art and Art History Department at the University of Nebraska at Kearney, a position he held for the next 32 years. During his time at UNK he increased the Art Department to 15 full-time and 9 part-time faculty members and also added four new art degree programs. Jack retired in 2004 after a 43 year career at UNK. Through it all, Jack continued to create his own works of art. Jack married Stephanie Coggins on June 6, 1966 in Kearney. She passed away in March of 2007. Jack will be fondly remembered as an artist, educator and museum founder. He was one of three men that founded “The Museum of Nebraska Art (MONA)”. He was honored to serve as a board member at MONA for a number of years. Jack enjoyed reading, art, theater, musical performances, cultural activities and travel. Surviving relatives include his step-daughter, Kathy Brewer Smith of Ames IA; step-grandson, Casey Smith of Des Moines, IA; brother, Henry Karraker and his wife Bonnie of Abilene, KS; niece and nephews; Ricki Elliott and her husband Jeff, Devin Karraker and his wife Barbara, and Neal Karraker all of Abilene, KS; 8 grand nieces and nephews; 8 great grand nieces and nephews; many special friends and his wonderful care-takers, Tammey and Gene Frick of Kearney, NE. Jack was preceded in death by his parents; wife, Stephanie Karraker; brother, Don Karraker; niece, Carri Karraker

Jack A. Karraker, 84, of Kearney, died Saturday, November 23, 2019 at Brookdale Northridge Assisted Living in Kearney. Celebration of life services will be in the spring of 2020 with graveside services in Abilene, KS. Memorials are suggested... View Obituary & Service Information

The family of Jack A. Karraker created this Life Tributes page to make it easy to share your memories.

Send flowers to the Karraker family.